Tenleytown is one of the oldest communities in the District of Columbia, second only to Georgetown. Located far from the seat of the federal government, Tenleytown developed in the late 18th century as a rural village, at the intersection of River Road and what is now Wisconsin Avenue, in Washington County. The village centered on a tavern built by John Tennally to accommodate wagon traffic moving from outlying farms to the port of Georgetown. Originally known as “Tennallytown,” the commercial area consisted of a few stores, a blacksmith shop, and a church surrounded by farms, orchards, dairies, and forest. Notable remnants of old Tennallytown can be found at The Rest, a large house at 39 th and Warren, and Dunblane, now on the campus of the Washington College of Law.

During the Civil War, Tennallytown became home to Union forces charged with protecting the District. Construction of Fort Pennsylvania, later renamed Fort Reno in honor of Major General Jesse Lee Reno, began in 1861 on a former farm and orchard located at the highest point in the District. After the war, a racially-mixed, mostly African American community called Reno City evolved on the site of the former fort. Reno City had about 100 homes, plus stores, churches, and a fraternal lodge. The Jesse Reno School for African American children was constructed in 1903. 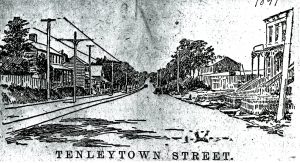 After the streetcar began to connect Tennallytown/Tenleytown to downtown Washington in 1890, the neighborhood underwent significant growth. By the 1920s white middle-class subdivisions appeared, and despite the protests of residents, local and federal government agencies condemned parts of Reno City to make way for Deal Middle School, Wilson Senior High School, water towers, and park land – known today as Fort Reno Park. In 2015, the Tenleytown Historical Society highlighted the history of the Reno School, now renovated as part of Deal Middle School, and the razed post-Civil War community in a permanent exhibit at the school.

In the early and mid-20th century, Tenleytown’s tree-lined, quiet streets continued to attract Washingtonians as the residential community grew around Wisconsin Avenue. Sears Roebuck opened its Washington department store in 1941, bringing an economic boon to the commercial area. However, Tenleytown remained a fairly sleepy suburban enclave until the opening of the Tenleytown-American University Metro station in 1984. 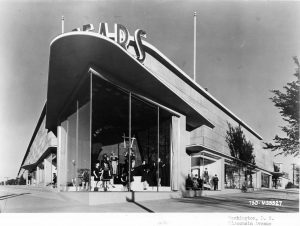 In the late 1990s, Tenleytown’s two major retailers – Sears Roebuck and Hechinger hardware store – closed, remaining vacant for several years. Just a few years later, the old Tenley-Friendship Branch Library, at the corner of Wisconsin Avenue and Albemarle Street, was razed to make way for a new, modern branch, but construction was delayed for many years leaving a vacant lot. Tenleytown’s business district fell into decline.

This downward trend began to reverse as Whole Foods Market opened; CVS Pharmacy moved into the former Hechinger’s building; and Best Buy, The Container Store, and Ace Hardware opened in the former Sears building. The rebuilt Tenley-Friendship Branch Library finally opened in 2011, and has once again become a center of community life.

Today, new residential buildings at City Line, Tenley Hill, the Frequency, and Tenley View have brought opportunities for apartment living in Tenleytown, and more such projects are forthcoming. New restaurants are bringing life to the commercial strip, which is also a welcoming home to small and local retail, including the iconic Middle C Music store.

Tenleytown continues to grow and thrive, blending a small town feel with a vibrant array of urban amenities along Wisconsin Avenue. However, the community never forgets its place in history. Landmarked sites along or near Wisconsin Avenue include the Sears Building, Eldbrooke Methodist Church (now Citizen Heights Church), the Methodist Cemetery, the Western Union Tower, Immaculata College/Capital Hall and Dunblane on the Washington College of Law campus, Janney Elementary School, Wilson High School, and the Jesse Reno School. Other historic sites can be found at Chesapeake House and the William R. Singleton-Hope- Lebanon Lodge, as well as along the Grant Road Historic District, which includes Tenleytown’s oldest remaining commercial building, constructed in the late 19th century.